It is with great anticipation and excitement that we can share the full lineup of FIBER’s upcoming End Of Year party at the infamous Club Sexyland.

Together with a wide variety of artists we’ll create an unexpected evening filled with short performances, demonstrations, project pitches, music, warm gluhwein and cold beers. The evening is set up as a space for experimentation: some of the performances are first-time try-outs, the DJ-sets could travel anywhere, while others might only share a glimpse of their new projects. Most important of all, it’s the perfect opportunity to meet each other, get inspired and drink a beer. Join the party! 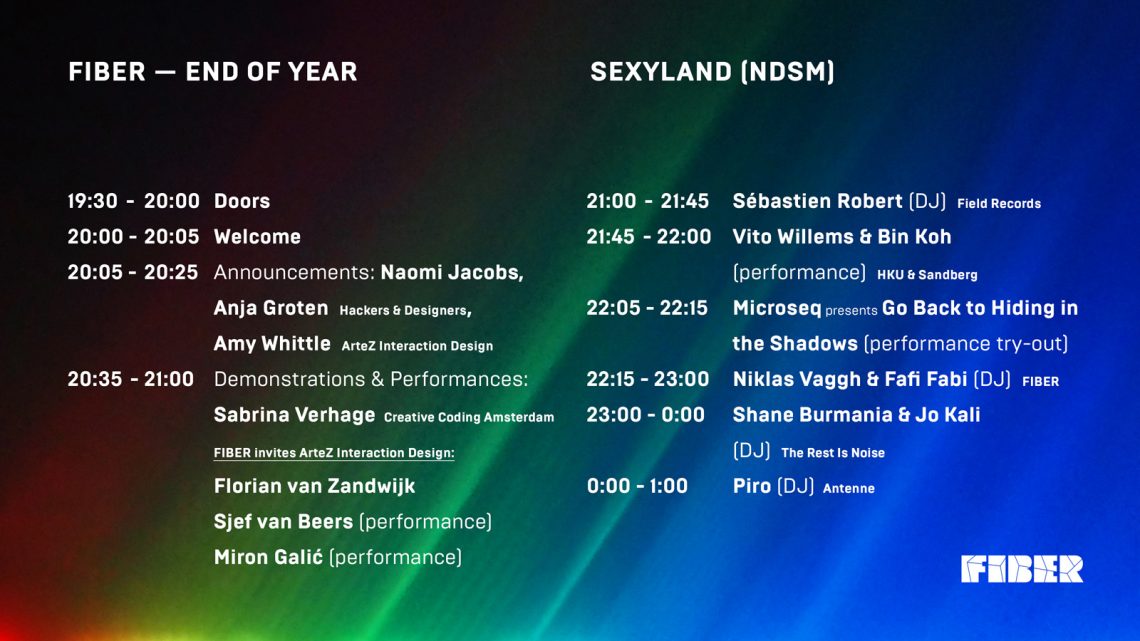 Naomi Jacobs (NL)
Naomi Jacobs will join us to introduce the upcoming collaborative new book ‘Onszelf voorbij, kijken naar wat we liever niet zien’ (2018, De Arbeiderspers). Philosophers Lisa Doeland, Elize de Mul and Naomi Jacobs explore the erratic symptoms of living in an uncertain world in their book. Through critical analyses of divergent phenomena such as garbage, mindfulness-retreats, and quantified babies, they provide the reader with an unraveling and kaleidoscopic view on current times.

Anja Groten (Hackers & Designers)
Anja Groten from Hackers & Designers joins us to talk about H&D and their autonomous car project. Hackers & Designers (H&D) has been experimenting, researching and developing new and controversial technology and learning processes with artists, designers, (software) developers and hackers in Amsterdam and abroad since its founding in 2013. Beginning as a cross-disciplinary meet-up community in Amsterdam, H&D has established a far reaching global network that has grown out of both workshops, talks and lectures abroad by bringing international talent to the Netherlands via the Hackers & Designers Summer Academy (HDSA), exhibitions and public programs.

Amy Whittle (ArteZ Interaction Design Alumni)
Amy Whittle is an interaction designer with a fascination for data, prints, video, products and installations focusing on interactivity. Her work can be considered either art, design or a combination of the two, intertwining different and non artistic disciplines to projects based on technology, biology and history. Amy will present her newest work ‘The Etched Inkjet Printer’.

Ever since participating in the first Sex Tech Hack at Goldsmiths in London, Sabrina has been fascinated by the influence of sex technology on society. Dedicated to create engaging experiences that enable change, she has created interactive vibrators and visualizations and organized a workshop ‘hacking vibrators’ to spread the love. She will give a short talk and introduces her prototypes. She might even share her newest project based on machine learning.

FIBER invites ArteZ Interaction Design:
Florian van Zandwijk, Sjef van Beers, Miron Galić
→ Miron Galić will be showing his performance Maska. In June this year, Miron traveled from Amsterdam to Sarajevo, Bosnia & Herzegovina, his city of birth, to make screenshots of his face in the webcam app Photo Booth; sitting behind his twin brother’s laptop, on a rooftop overlooking the city, pronouncing the screenshots’ filenames in his mother’s language, from the exact moment that he turned 27 years old.
→ Sjef van Beers is an Interaction Design alumnus. He will perform a Face Swap experiment at Sexyland.

Sébastien Robert (Field Records)
Our dear friend Sébastien Robert’s (Field Records) will spin his favorite records for you at Sexyland. His work is the result of several encounters and experiences across the globe. Wherever he lived, he tried to get a grasp of the local culture and caught the atmosphere that he later implements in his own music. Come listen to this world traveler, FIBER friend and Field Records representative on the 19th!

Vito Willems & Bin Koh (HKU & Sandberg)
Vito Willems (HKU) and Bin Koh (Master of Voice, Sandberg Instituut) will perform a new piece called ‘Disruptive Silence’. When we asked them to be part of this event, they proposed to present this for the very first time at Sexyland.

“Voices wander aimlessly from space to space. Localised voices are following the signals made out of non-voice and light, modifying the meaning of its physical presence. Perhaps, the voice does not necessarily support its meaning but can be able to interrupt it. This interruption amongst voices, non-voices and light creates a symbiosis with the space.”

Piro (Antenne)
Piro (Paul Gabriëls) is co-founder of the Antenne evenings at OT301 and brings along a wide variety of basslines to wherever he goes. Come celebrate with us!